As an old (and long time too 😀 ) Opera user I really miss the handy images properties display in the new Chromium based browsers, especially the EXIF info, so in pure self defense I decided to modify some code taken from http://www.nihilogic.dk/labs/exif/  and added some context menu magic to it to get a similar function in Opera 15++ and Chromium 9++ 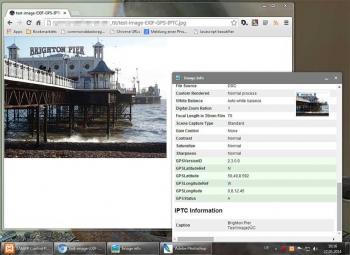 Additionally I added a small parsing routine for raw GIF file data that shows the number of frames in animated GIFs (Thanks to Brian for the head up which bytes probably start a new frame – you were right). Sadly It doesn’t seem to run on a Mac (as one user reported) and I can’t do anything against it because I don’t own a Mac (Windoz rulez! 😀 ) Works in Mint.

Here the links to the extensions on my private web-space:

If you want something fancier, you can try this extension from the Chrome store (Thanks to Alexs for the hint) I didn’t test it yet, so I don’t know if it shows e.g. the number of animation frames in a GIF too – if yes I will at least have learned a little bit by cobbling it together by myself.

A really nice implementation with the benefit of adding some of the old Opera right-click on an image behavior too can be found in the Opera add-ons catalog (Thanks to claudio791 for the hint). It displays the EXIF metadata too and the source code is available at GitHub. (Nicer code too because Joel is a real programmer)

Why another EXIF viewer?

(If that is of no concern for you, you might give one of the many other image and EXIF related extensions a spin, especially this one is very nice.)

… and of course because I wanted to see if I can do it.

OK, in plain text: It now unloads itself if it is not in use, meaning, it will free your RAM etc. and I set only the permissions for the extension that it really needs for work. Now it can’t access all of your history, all of your tabs etc. any more – only the tab in which you right click on an image. IMHO more extension authors should do that, but most of them do not give a s**t about that and grab everything they can. I am not so sure if that doesn’t have security and privacy implications …

GPS, yay! You can test it with this image on flicker

Warning – 6 MBytes image, the extension might take some time to download the raw binary data (e.g. 10s with a 6 Mbit/s connection)

Rudimentary IPTC support added. You can test it with this image.

IPTC mapping complete as far as it made sense for images.

Link to the place in Google and Bing maps if GPS coordinates are present (opens in a new tab).

Hint: if you use this image, make sure you switch to street view too 😀

Version 1.2.5 (for internal tests with onyl)

Open a webpage with an image or one of the above linked test images, rightcklick on it and select the Extensions entry in the context menu

Please keep in mind that I am not a good Javascripter, more of an advanced copy&paster, and I am quite proud that I was able to parse the binary data at all, so please don’t shoot me if something goes horribly wrong. Feel free to post improvements or wishes in the comments below 🙂

16 replies on “EXIF Viewer Extension for Chromium Based Browsers”